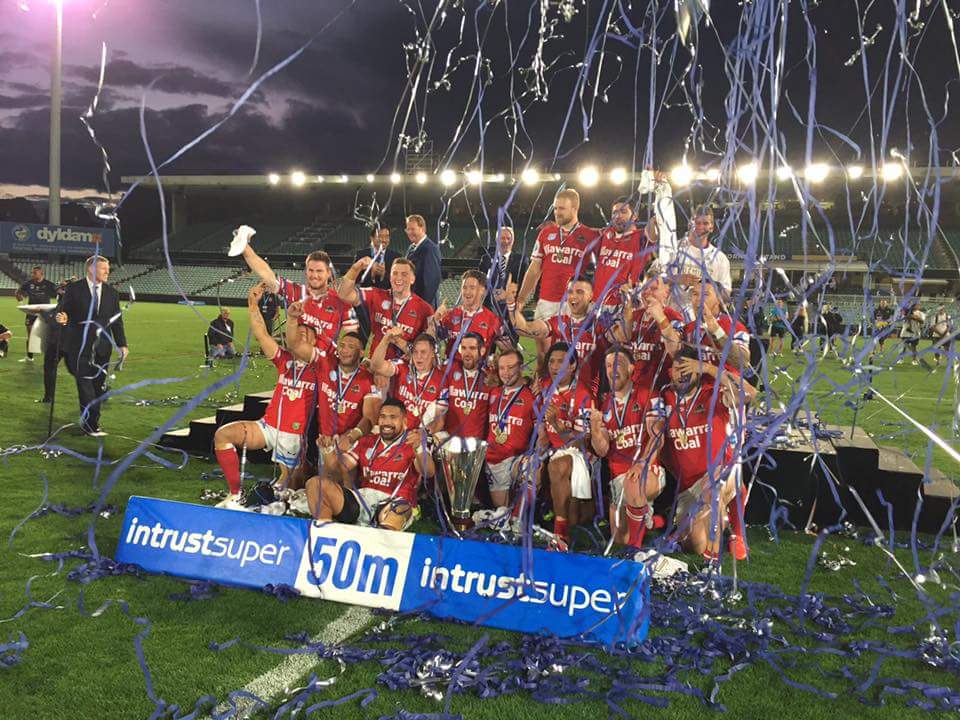 The Illawarra Cutters have won the Intrust Super Premiership NSW Grand Final against Mounties at Pirtek Stadium after finishing tenth in 2015.

Adam Quinlan won man of the match, but it was a Drew Hutchison field goal that separated both teams in what was a 21-20 thriller.

Jason Demetriou has now been a part of three Grand Finals in a row, highlighting his incredible coaching credentials, and they will now take on the Burleigh Bears in the Intrust Super Championship next week as a curtain raiser for the NRL Grand Final.

The Cutters laid their intentions of playing a more expansive style of football early, throwing the ball around like it was going out of fashion.

It seemed to work, however, and they opened their account after Josh McCrone broke through the line and played the ball to Levi Dodd, who showed brilliant awareness to dart out of dummy half to the short side and strolled over in the corner.

The Cutters marched their way up-field and once again found themselves in positive field position, and they took advantage of that when Adam Quinlan put in a neat grubber behind the defence for Kurt Mann to jump on the ball to extend the lead to 10-0.

Sometimes, in Rugby League, you need the bounce of the ball to go your way, and that is exactly what happened for the Cutters immediately after the previous try. Drew Hutchison put up an ugly torpedo that was allowed to bounce, and to the horror of Zac Santo, the ball backtracked. McCrone managed to toe the ball forward, straight into the arms of Kalifa Fai Fai Loa, who spun through the remaining defender to score an amazing try.

Cutters believed they had scored a similar try off the ensuing set when Adam Quinlan put a kick up for Mann to re-gather and score, but the video ref spotted an offside chaser.

At 16-0, Mounties could not afford to let in another try, and the brilliance of Sam Williams reduced the deficit to 10 after he threw a perfect, long, spiral pass to Eddie Aiono to score in the corner.

Fai Fai Loa dropped the ball in the process of scoring, and Mounties responded with a try of their own thanks to a brilliant ball by Adam Clydsdale from dummy half to Sam Duggan, who crashed over to score.

Maurice Kennedy was cruelly denied when he was millimetres away from grounding a Sam Williams grubber, but set up the next try on the stroke of half-time when he gave a ball to Scott Sorenson, who scored in the corner to reduce the deficit to 16-14 at half-time.

Mounties took the lead just minutes into the second half when Jarrad Kennedy flicked a ball to Brenko Lee, who skilfully put it on his toe into the in-goal, and the Intrust Super Premiership NSW fullback of the year, Zac Santo, athletically dived to get a hand on the ball.

With four points in it, the Cutters were determined to be next on the board, and the wing of Fai Fai Loa had been a danger for Mounties all night. They shifted right, and Quinlan got a ball for the try-scoring winger to stroll over and lock the scores up at 20-all.

With less than seven minutes remaining, NRL-bound Drew Hutchison slotted a field goal to take the lead for Illawarra, which proved to be the match winning point.

Sam Williams attempted a field goal on the buzzer, but it was waved away, and the Cutters completed a fairy-tale tenth to first in the space of a year.