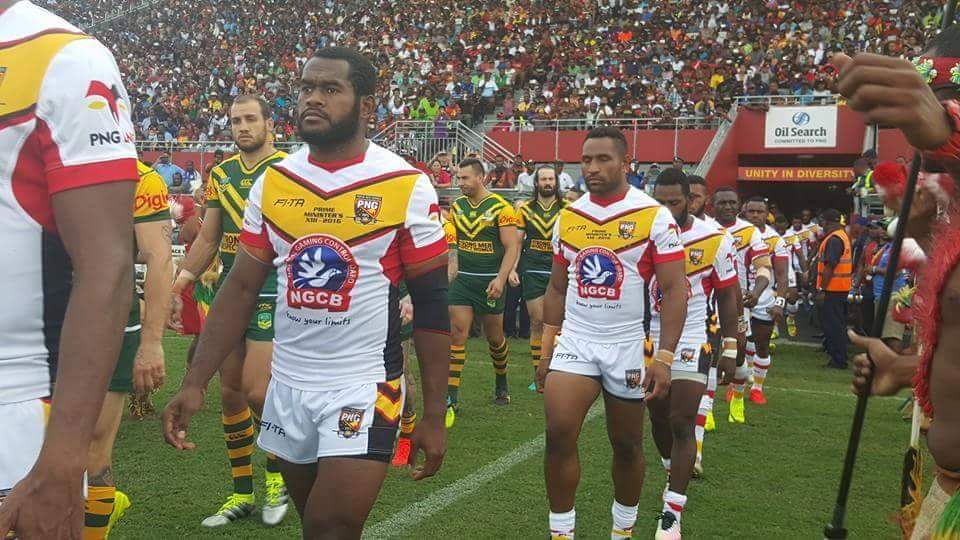 The tourists got off to a nervous start and PNG took advantage of driving defence and big hits in the first few minutes, much to the delight of a sold out National Football Stadium in the PNG capital.

The nerves didn’t last long however, as Josh Dugan opened the scoring account in the fourth minute

Chants of ‘Inglis’ and ‘Radradra’ have followed the Australian team since arriving in PNG and the crowd of 15,011 leapt to their feet when Radradra was on the end of an Inglis pass to score in the corner in the 17th minute.

The biggest cheer of the first half, however, was reserved for the captain, Greg Inglis, who crossed the line with 30 seconds remaining.

If there was a roof on the National Football Stadium, it would have been blown off after Inglis promptly followed the try with his trademark ‘goanna’ celebration.

With every replay, the crowd erupted into louder jubilation. Inglis revealed after the match that the local NRL PNG team had received hundreds of emails in the week leading up to the game, enquiring whether he would be celebrating with the ‘goanna’ if he scored a try.

It was a scrappy 10 minutes by both sides to open the second half, before the Australian PM’s captain picked up where he left off, crossing to complete a double in the 53rd minute, this time delighting the crowd with a somersault to plant the ball down.

Dugan crossed for his second try of the afternoon soon after and the score moved to 32-0 at the 60-minute mark.

PNG never gave up throughout the match, with the crowd urging their national team on and the Australians were certainly on the end of some bone-crunching tackles.

A try to Tyson Frizell and a hat-trick to Mitchell Moses rounded out the afternoon, with Moses on kicking duty in the first half and Moylan completing the role in the second.

Australian coach Mal Meninga was delighted with his team’s efforts, saying the job of selecting the upcoming Test Match and Four Nations team was not made any clearer after the commitment from the PM’s XIII today.

“We didn’t have a bad player today. They all played extremely well, with the right attitude and the right commitment,” Meninga said.

“I thought it was a really good team effort and that’s what we expect of an Australian side. It’s a team effort and individuals get the reward out of that by being successful.”

Inglis, on debut in PNG, said his time in the country had been enjoyable and the people had an immense passion and support for rugby league everywhere the team travelled.

“The community welcoming this side over here has been fantastic and I’m glad that I got the experience, that’s for sure.”

Selection for the Test Match and Four Nations tour will be announced in early October.