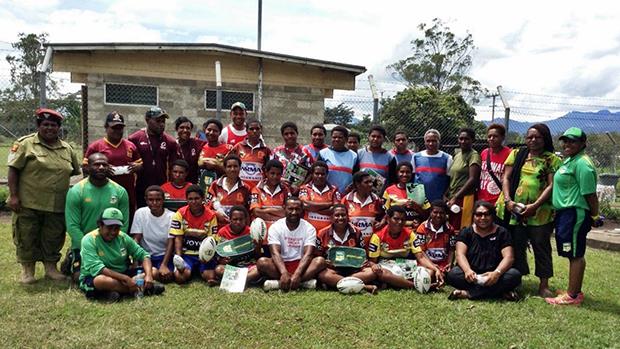 No boundaries for rugby league in PNG

As the sun rises above the horizon, gently melting away the cool misty scenery, a nearby bird cries marking the arrival of first light. The sun surges higher, warming the earth below. It beckons the people out of their grass huts, and the warmth of the fireplace that now bears a small cluster of embers; reminiscent of the night’s flames that danced erratically as lively chat rolled around.

In what would be a typical morning in the rustic hinterlands of Papua New Guinea’s highlands, the League Bilong Laif (League for Life) team based in the Goroka township of Eastern Highlands Province is preparing for a day out to a nearby rural community. Only, this is not any typical visit. Nor is it an ordinary League Bilong Laif (LBL) session they will be undertaking.

The team heads out in their 4×4 vehicle toward Bihute Correctional Service in the countryside where they will be conducting a Community Outreach Program with female inmates of the facility.

The Community Outreach Program was established to engage meaningfully with at-risk groups in vulnerable communities. It is designed to empower identified groups with appropriate key social messaging and activities to deliver positive behavioural change via rugby league. The program is run alongside the regular LBL school sessions on a per-term basis.

Leading the team is Rutha Omenefa. She had organised for the team to spend a day imparting key social messages and engaging the women in some rugby league drills and games. The women inmates at the Bihute Correctional Services don’t get that many visitors and certainly none from sport-based development programs such as League Bilong Laif.

It is no secret that rugby league can be utilized, and quite effectively, as a tool for development, particularly in a country such as PNG where the game is followed with much passion.

Rutha’s team shared messages on empowering women, the value of respect for self and for others, which was well received. Correctional Service Officers and female inmates stated that the program was an “eye opener” and an “enjoyable, positive experience for all”.

The visit, and in particular the program itself, paves the way for a slow but steady change in the general perception of rugby league as a male-dominated sport, and comes at a time when the cool highland province is witnessing a growing interest in women’s rugby league. This breakthrough is particularly important in a society where men remain the dominant figure in most aspects of life in PNG.

In addressing the conventional view, NRL encourages more female participation in the programs run and in doing so, advocates messages for female equity in the country. Rutha’s presence as a female lead development officer and the demonstration of her leadership is certainly contributing toward the shifting trend, earning her respect amongst male colleagues and the communities they call on to run LBL programs.

The NRL in PNG has other full-time female development officers in Port Moresby, East New Britain and the Autonomous Region of Bougainville who are also contributing to the change, with each becoming role models for women and girls in their respective regions.

It is thus clear that no matter which school, institution or community League Bilong Laif visits, Papua New Guineans have come to appreciate that the nation’s favourite sport has no boundaries.