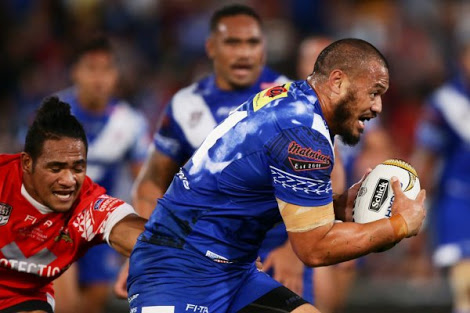 A raucous Pirtek Stadium crowd witnessed a special night of rugby league as Samoa held on to beat Tonga 18-6 in a thoroughly entertaining encounter on Saturday night.

Played in front of 15,225 passionate fans, the two Pacific nations put on a cracking show to cap off what had been an incredible festival of representative footy.

Tonga raced out to an early lead inside five minutes but failed to score a point after that as the boot of man of the match Fa’amanu Brown effectively kicked Samoa to victory.

Tonga had a better completion rate and actually ran for 300 metres more than their rivals, with David Fifita (179m) and Siosaia Vave (178m) doing the bulk of the work off the bench, but couldn’t find a way through Samoa’s spirited defence.

Tonga suffered a massive injury setback inside the opening 10 minutes when Samisoni Langi – the man of the match in the 2013 corresponding clash – did his ACL.

Frank Pritchard could find himself in hot water after collaring Tongan winger Michael Oldfield with a coat hanger in the 25th minute.

Spurred on by their awe-inspiring rendition of the Sipi Tau, Tonga took just four minutes to strike with Feleti Mateo finding a flying Mosese Pangai with an inch-perfect kick to get Mate Ma’a on the board.

The Samoans wouldn’t be outdone and turned to the air in search of their first points. A cross-field kick by Fa’amanu Brown was spilled by Tongan winger Michael Oldfield into the arms of Antonio Winterstein to level the game after 15 minutes.

Another glorious Mateo kick should have led to more points, but Tongan skipper Sika Manu dummied when he probably should have gone through the hands.

It quickly turned into a tit-for-tat contest as Samoan skipper Frank Pritchard then had a try disallowed after Brown was ruled to have dropped the ball in the build up.

Passions threatened to boilover in the 38th minute when an apparent knee from Solomone Kata on Samoa’s Kirisome Auva’a sparked a minor scuffle, but a penalty goal right on half-time to the Usos quickly settled things down.

Neither side could find a chink in the opposition’s defensive armour until a moment of individual brilliance from Ricky Leutele in the 55th minute threatened to blow the proverbial roof off Pirtek Stadium.

The Samoan centre stepped past his opposite number with a brutal left-foot shimmy before fending away from Sika Manu to cross for his first international try to give his side a crucial eight-point cushion.

Tongan hearts were eventually broken five minutes from full time when winger Matthew Wright burrowed over from dummy half to seal the deserved win for Samoa.

Samoa might have run out victors on the scoreboard but international rugby league was the real winner with a record crowd tuning in to watch the game.