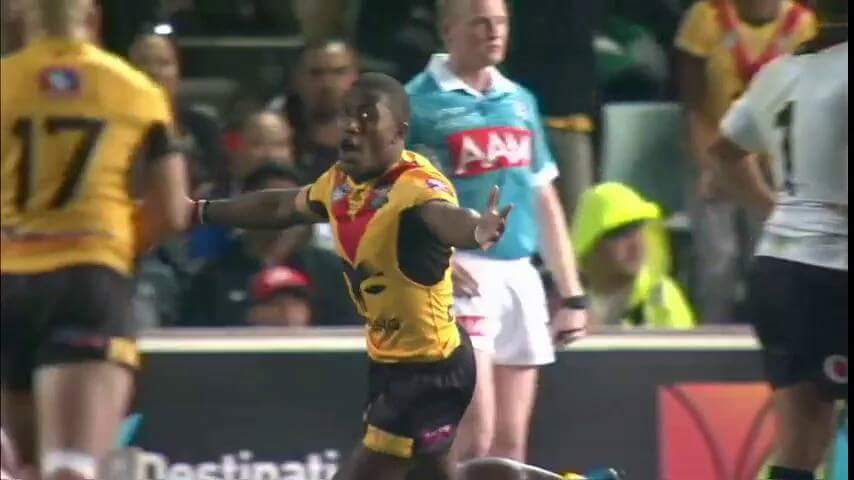 Papua New Guinea has provided rugby league with the feel good story of the year after they stormed home to beat Fiji 24-22 in a thriller at Pirtek Stadium.

Fiji led 16-8 at the break but had no answers for a PNG side that helped breathe fresh air into the international game.

Papua New Guinea’s spine proved the difference in the end with halfback Watson Boas scoring a double, his brother Ase kicking four goals and hooker Wartovo Puara Junior proving a handful whenever he touched the ball with two try assists.

But it was fullback David Mead who truly shone. In his first international game since 2013, the Titans flyer ran for 162 metres and came up with two of the best tackles you’re likely to see in 2016 to guide his side to victory.

The first was a bone rattler that stopped Brayden Williame in his tracks after he had earlier made a scything run into opposition territory. It was as if time stood still as the Fijian centre was momentarily frozen before crumbling to the turf.

Mead wasn’t done there, however, lifting his game to another level with a gut-busting effort to deny Tyrone Phillips a certain try five minutes before the break.

The Fijian flyer looked set to score after racing 70 metres but was somehow chased down by the PNG No.1 who not only made the tackle, but also held him up all in the one motion.

Fittingly it was Mead who almost set up the game’s opening try when he put winger Justin Olam in space, but the international debutant couldn’t hang on to the ball.

Given their early dominance it came as no surprise that the Kumuls were first to score. Fijian fullback Phillips failed to defuse a Watson Boas bomb, allowing the PNG halfback to gather the loose ball and hurdle over the fallen bodies to score.

A powerful charge from wrecking ball Luke Page off the kick off, followed by a clean line break by Mead put the crowd favourites straight back on the attack before a penalty allowed them to push their lead out to eight points.

That would be their last highlight of the opening 40 as Fiji’s experience started to show. Roosters cult hero Eloni Vunakece charged onto an inside ball from No.7 Maurice Kennedy, before a penalty goal levelled the scores shortly after.

Instead it was the Fijians who kicked clear courtesy of the boot of Sitiveni Moceidreke and the magical hands of Etuate Qionimacawa who combined for two special tries to finish off the half.

The first came on the back of terrific vision from the Fijian No.6 to find his winger with a pinpoint kick, but Qionimacawa has to be commended for his amazing efforts to reel in the ball and slam it down in one motion.

The pair combined six minutes later – this time via a grubber – to give Fiji a deserved eight-point lead at the break only moments after Olam had been sent to the sin bin for a professional foul.

Any concerns of a blowout were quickly put to bed as PNG came out all guns blazing after the break to hit back just two minutes into the second stanza.

Canberra’s deputy rake Kurt Baptiste played a big part in the four-pointer, sniping out of dummy half before hitting a hard-running Kato Ottio to crash over on the left edge.

Having pulled to within two points of the lead, the Kumuls then found themselves in front by the same margin 10 minutes later as Boas – who was stationed at right centre – ran onto a perfectly timed pass from No.9 Wartovo Puara to grab his second of the evening.

Any form of structure quickly disappeared as the game turned into a free-flowing festival of footy that saw both teams let the ball sing from sideline to sideline.

Fiji went very close to reclaiming the lead on the hour mark when some incredible hands down the left released the red-hot Qionimacawa, but the winger couldn’t control the ball as he went to ground.

In a game that at times resembled Nines, both No.9s lived up to the name with PNG hooker Puara going straight through only to have his pass picked off on the next play by Fiji’s dummy half James Storer.

With the game in the balance, it was fitting that Puara stepped up when his side needed him most, dancing across field before linking up with Nene MacDonald who charged through to make it an eight-point game inside the final 10 minutes.

There was one final nervous moment as Fiji scored late to close the gap to two points, but Qionimacawa’s third try of the night – largely thanks to Sisa Waqa – proved little more than a consolation.