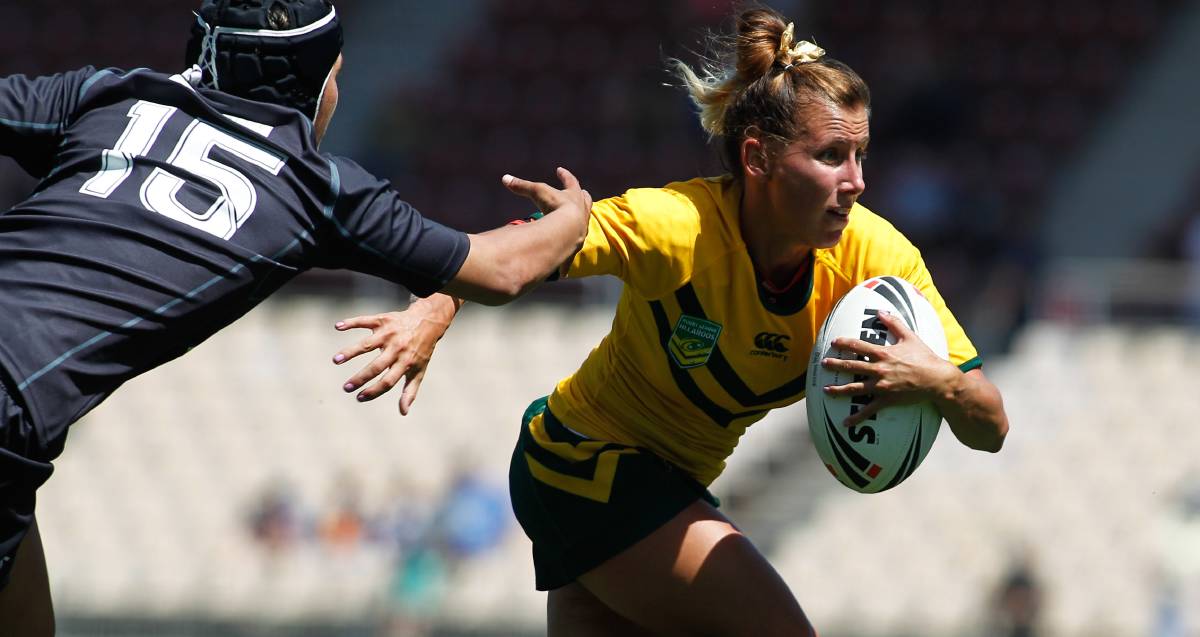 Jillaroos fullback Sam Bremner hopes to see an expanded women’s World Cup when the tournament is held in Australia and New Zealand in 2017.

Having dazzled rugby league fans throughout the Auckland Nines, it is safe to say that the women’s game is on the rise.

The superstar fullback had only just started playing rugby league when a meeting with a former NRL cult hero kick-started her progression to the international stage, and says anyone wanting a career in the game should follow her example because it can lead to great things.

“I didn’t even know the Jillaroos existed until Mark Riddell asked me to go play for NSW,” she said.

“I barely knew the rules. I’d only just started playing, and it took a little bit of convincing, because I didn’t believe in myself or my abilities.

“But with great coaching from everyone I’ve had, I ended up in the World Cup team and managed to get Player of the Tournament.

“That’s probably the highlight of my career and something that makes me keep going because I want to get to the next World Cup.”

Bremner has been a mainstay at the back for the Jillaroos ever since, and is eyeing off the 2017 World Cup on home-soil as the most important tournament of her career.

Australia’s women’s national team is about to begin preparations for a big clash against the Kiwis in May that Bremner hopes will put them in good stead leading into next year’s event.

“They’ve just announced the squad for the Anzac Test match in Newcastle which will be a curtain-raiser for the men’s match,” the fullback said.

“We are in training for that, and we’re going to camp on the Friday before the game, and on the Sunday they’ll cut the squad of 23 down to 18.”

While most of her matches have come against the Kiwis, Bremner is hoping to see the women’s international game grow and hopes next year’s World Cup can be the catalyst for expansion.

“We play New Zealand a lot, and they are an awesome team, but it would be great to play against other countries as well,” Bremner told NRL.com.

“I don’t know about the logistics of having warm-up games with other countries, but I think it would be awesome to.

“Last World Cup we played against NZ, France and England, and they were awesome.

“England was probably one of the hardest games I’ve played. They are solid and tough and rough; completely different to the Kiwis, but still a great challenge.

“I’d love to play someone like Canada or America who I know are trying to build a rugby league side. It’d be great to have some sort of practice against them.”

Next year’s World Cup will be co-hosted by the southern rivals, with many expecting a replay of the 2013 final which was won by the Jillaroos 22-12.

Having led Australia to their first ever World Cup triumph, Bremner drew comparisons to her Kangaroos counterpart Billy Slater – an honour she was proud to receive.

“I feel quite humbled to have that title,” Bremner said.

“I do try to base my game around him. I think we’re similar in that we run a lot. We’re more of a runner than a ball-playing fullback. I learn a lot from watching him and other fullbacks in the game.

“I get a bit nervous by it because I feel it holds a bit of an expectation.”