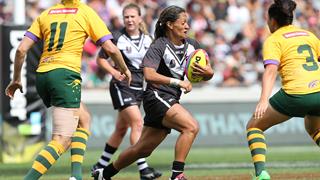 The Kiwi Ferns squared their three-match series with the Jillaroos 9-0 on the back of a powerful two-try second half.

The match was played between the two 20-metre lines in the opening exchanges, with the best chance coming when an Allana Ferguson kick bounced off the Kiwi defence and came back with Kezie Apps. But a Charmaine McMenamin line break shortly after put the Ferns on the attack and forced the Jillaroos to work it off their own 10.

Some furious Ferns defence hemmed them in until a long run outside the defence from winger Karina Brown then a beautiful line break from fullback Sam Bremner the following set caused some headaches for the Ferns. The Kiwis were their own worst enemy at times with Tasha Davie throwing a wild pass into touch and Teuila Fotu-Moala tossing an intercept.

Jillaroos livewire Casey Karklis had some threatening darts when she was injected later in the half but the score remained nil-all at the break.

A sweeping left-side shift from the kick off saw the Ferns start their set from almost halfway and a few plays later another wonderful left-side movement ended when Fotu-Moala draw the last defender and tossed a short ball for Mary-Jane Ale to bag the first try.

A long-range break from Langi Veainu looked certain to lead to a try until a brilliant chase and covering tackle from Bremner but with the Jillaroos scattered the Ferns spread it back infield and Davie was on the end of a regulation overlap to score under the posts.

A brilliant run from Karklis got the Aussies in attacking range for the first time in the half with three minutes remaining but when Maddie Studdon’s pass was intercepted the Jillaroos’ last chance went begging.