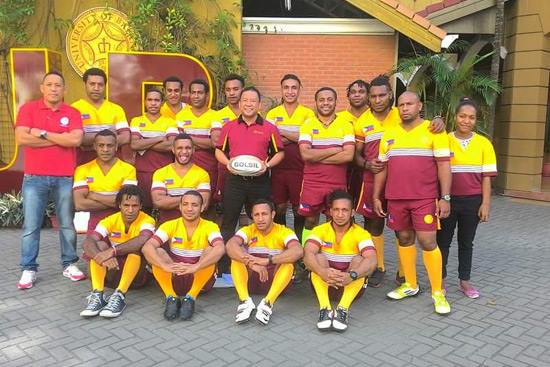 In August 2013 Papua New Guinea (PNG) students studying in many of the two dozen Colleges and Universities in the province of Batangas in the Philippines, were missing playing “The Greatest Game of All”; Rugby League, so they created the Batangueno Mandirigmas (Batangas Warriors) Rugby League team. So PNG students spread across these Colleges and Universities could play the game.

Being aware of the existence of the newly formed Philippines National Rugby League (PNRL), they were keen to play in the new League and Jannel Dela Torre made contact. But unfortunately due to exams and the tyranny of distance, though invited the Batangueno Mandirigmas, were not able to compete in the second PNRL Rugby League 9s tournament in the Philippines, the October 19th 2013, Zambales 9s.

It would take another year before the Batangueno Mandirigmas, would play in a local Rugby League tournament and their chance came on September 16, 2014 at the Adventist University of the Philippines (AUP), PNG Independence Day Celebration Rugby League tournament. For a second year in a row they again competed in last September 13th 2015, PNG Independence Day game at AUP.

With the majority of foreign students attending the University of Batangas (UB), coming from PNG, 3rd year Civil Engineering student, Ismile Kepu who is the current President of International Student Organization at UB, discovered that it was difficult getting sponsors for the Batangueno Mandirigmas. With few people in the Philippines knowing that the game of Rugby League even exists.

So with the majority of foreign students studying at UB coming from PNG, Ismile wrote a letter to the University President, Dr. Hernando B. Perez, asking permission to introduce Rugby League into the University’s official sports program. The President approved the letter of request to sponsor the team and bought the team new club jerseys.

Ismile stating of the approval: “I am happy and I thank the University President Dr. Hernando B. Perez and Vice Presidents: Dr. Abegayle Machelle Perez-Chua for Academic Affairs, Mr. Atty. Jesus V. Mayo and Leiah Sheila M Atienza for Students and External Affairs for making things possible for the foreign students to introduce Rugby League in Batangas and here in the Philippines.”

But unlike the 2013 Batangueno Mandirigmas Rugby League team who were made up of students from the many Colleges and Universities in Batangas. The newly formed UB Toro Rugby Football Team, is an exclusively University of Batangas student team.

With the University of Batangas the first none Maritime Industry School in the Philippines to introduce Rugby League officially into its sports curriculum, Ismile is looking forward to bringing the University team the UB Toro into the PNRL local tournament planned for 2016.

So on the 27th of November 2015, the newly formed UB Toro Rugby Football Team proudly took part in the annual University of Batangas Sports Parade day, introducing the new sport to the school and the province of Batangas.

Ismile is keen to introduce “The Greatest Game of All”, Rugby League to local Filipinos in Batangas.

Jannel Dela Torre a PNG citizen of Filipino heritage and a cofounder of the 2013 Batangueno Mandirigmas is one very good Rugby League player according to Ismile.

Ismile states that: “The future plan for the UB Toro’s is to introduce Rugby League in Batangas province and teach the young Filipino boys (future UB Toro players) to take part so that after we have graduated and returned home to PNG, they will continue from where we’ve left off and so that one day a Filipino UB Toro player will represent the country as an International Philippines Tamaraw!”

With the PNRL still in its infancy, the UB Toros are organising their own preparations for the 2016 PNRL season and are currently training and looking forward to play a trial match against the Manila Recto Royals. Another PNG student team who have been regular competitors at the PNG Independence Day celebration games at AUP, since its inception 3 years ago. The Toro’s and Royals are yet to confirm the date and the venue for the trial, so stay tuned for more Rugby League news from the Philippines.