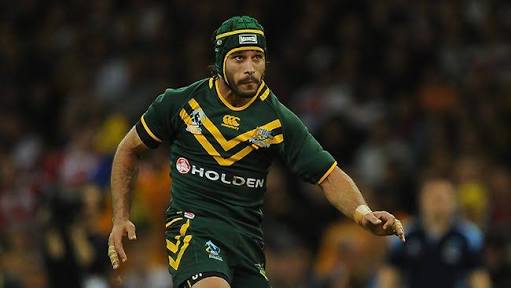 The 32-year-old beat off competition from New Zealand’s Roger Tuivasa-Sheck, his closest rival, and England’s Zak Hardaker, who came third. Cameron Smith and Corey Parker (both Australia) rounded off the top five.

A 28-man panel featuring some of the sport’s most respected writers from both sides of the world – and several former winners of the award – were tasked with deciding the fate of Rugby League’s most prestigious individual accolade. A whopping 26 of them (93%) named Thurston player of the year. The two that didn’t gave him second spot.

“It’s obviously been a big year on and off the field and to finish it off with the Golden Boot is very special.

“There’s a lot of great players in both hemispheres and to be voted as the best is very humbling. I’m still a little bit lost for words.

“When I look at the previous winners — like Locky (Darren Lockyer) and Joey (Andrew Johns) who are legends of our game — to be the first person to receive this award for a third time is very humbling and I’m blown away that people see me in that regard.”

Rugby League World editor Joe Whitley added: “Johnathan has pulled off a miraculous haul of trophies and achievements in 2015 and is undoubtedly the best player on the planet. He’s Rugby League’s answer to Lionel Messi and we are lucky to be able to witness his brilliance. I look forward to presenting the award at our special Golden Boot dinner on Thursday, February 18th at Headingley.”

Issue 416 of Rugby League World also carries the prestigious World XIII. The same 28-man panel were asked to name top fives in each position, with their first choice earning five points, their second four, their third three and so on. The maximum points any player could earn in one position was 140. In the event of a tie, the player with the most first-place votes wins. For the first time ever, two Pacific Islanders made the final lineup. Here are the votes in full: