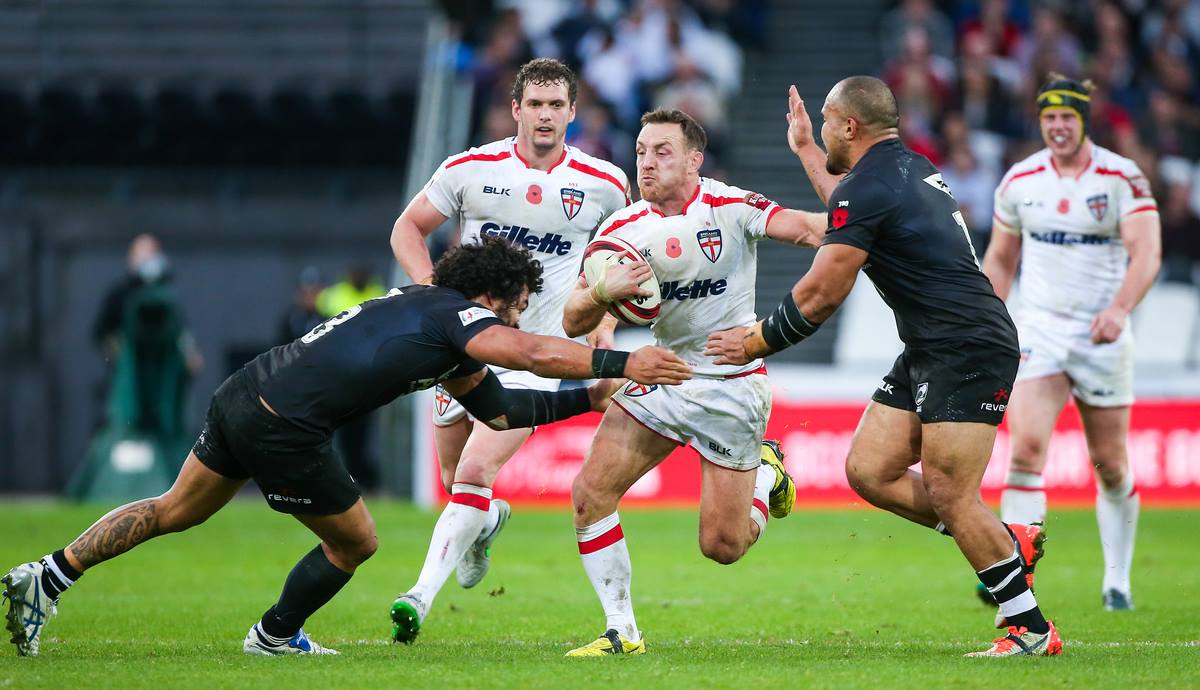 England has claimed the Baskerville Trophy with a thrilling 20-14 victory over the NZ Kiwis in the third and deciding test at Wigan.

In a match that finished three tries apiece, the home side led early and never relinquished their advantage, turning a tenuous 8-6 halftime scoreline into a 14-point lead with eight minutes on the clock. A late surge by the Kiwis raised hopes of a miracle comeback, but ultimately it was not enough to steal a win in front of the partisan 24,741-strong crowd.

A moment’s silence to honour those killed in the tragedy in Paris the previous night, along with the national anthems sung by Lizzie Jones – wife of the late Danny Jones, who died in a club game playing for Keighley earlier this year – heightened the emotional atmosphere at a packed DW Stadium.

The Kiwis were under the pump from the outset, forced into a line dropout when they were unable to contain the kick-off, but they handled England’s initial attacking barrage. The hosts made the first impression on the scoreboard in the fifth minute, however, with Gareth Widdop converting the second of two ruck penalties in quick succession for a 2-0 lead.

The rain tumbled down in Wigan, but both sides showed much more enterprise with the ball in hand after the arm-wrestle in London.

New Zealand stretched the England defence on several occasions during the opening quarter as Isaac Luke, Kodi Nikorima and Peta Hiku probed, but the scrambling cover was up to the task, while Jason Nightingale was denied a try by the video referee in the 18th minute due to a Hiku knock-on.

Hometown halfback Matty Smith, who came into the side for George Williams, set up an 8-0 advantage for England in the 25th minute with a neat grubber that deflected off Luke’s outstretched boot, allowing Canberra-bound second-rower Elliott Whitehead to swoop through and score near the posts.

The try was England’s first in more than 100 minutes of football against the Kiwis, who looked certain to reply soon afterwards before fullback Zak Hardaker bundled Nightingale into touch with a superb try-saving tackle.

But the Leeds star could not stop a sensational airborne finish by Nightingale six minutes out from halftime as the visitors were finally rewarded for their concerted pressure on England’s right edge.
The Kiwis ran the ball on the last tackle and a slick interchange of passing between Alex Glenn, Jordan Kahu and Nikorima gave the stalwart winger a passage through to the corner for his 15th test try.

Luke curled the conversion through from the sideline to trim the deficit to two points.

England held on to their 8-6 lead until halftime and were lucky to stay in front seven minutes into the second stanza after Roger Tuivasa-Sheck exploded onto an inside ball from Nikorima. Widdop came up with an excellent cover tackle to stop a try.

As the rain came down heavier, mistakes increased from both sides. Three consecutive Kiwi visits to England’s end resulted in handling errors in what proved to be a pivotal period.

The hosts landed a crucial blow in the 62nd minute during a rare foray into New Zealand’s 20-metre zone, with Whitehead beating three tackles on his way to a second four-pointer. Widdop restored England’s eight-point buffer with a coolly slotted conversion.

England skipper Sean O’Loughlin, playing on his home ground, sealed the match and the series with nine minutes to go, powering over next to the posts. Replays suggested Tuivasa-Sheck may have valiantly held the Wigan star up over the line, but video ref Gerard Sutton was unable to find sufficient evidence to overturn Ben Thaler’s original call of try.

The Kiwis retained a glimmer of hope with a spectacular try in the 74th minute. A Glenn offload opened up space near the England line for Nightingale, who produced a deft flick pass for Tuivasa-Sheck to muscle his way over out wide, setting up a 20-10 scoreline. Nightingale’s pass was reminiscent of Dean Whare’s spectacular flick that set up RTS for a try in the 2013 World Cup semi against England at Wembley.

An inspired piece of play by halfback Nikorima then set up a grandstand finish, putting in a pinpoint cross-field kick for Jordan Kahu, who slid over for the try. Luke’s conversion cannoned off the upright to leave the Kiwis six in arrears, however, ensuring England could not lose the match.

The Kiwis had one last opportunity to pull off a draw but their desperate attack came up just short as a relieved England hung on.

Wigan No.7 Smith was named man-of-the-match after consistently turning the Kiwis around with a superb kicking game during the second half, while clubmate and victorious captain O’Loughlin claimed the player of the series gong.

All 34 players contributed strongly to an outstanding test match, but England’s debutant winger Jermaine McGillvary warranted special mention for a blockbusting performance opposite the experienced Nightingale. Nikorima, Luke, Tuivasa-Sheck, Bromwich and Proctor were the standouts for the vanquished Kiwis.

England’s deserved 2-1 series triumph sets the scene for a fascinating Four Nations tournament in the UK in 12 months’ time.