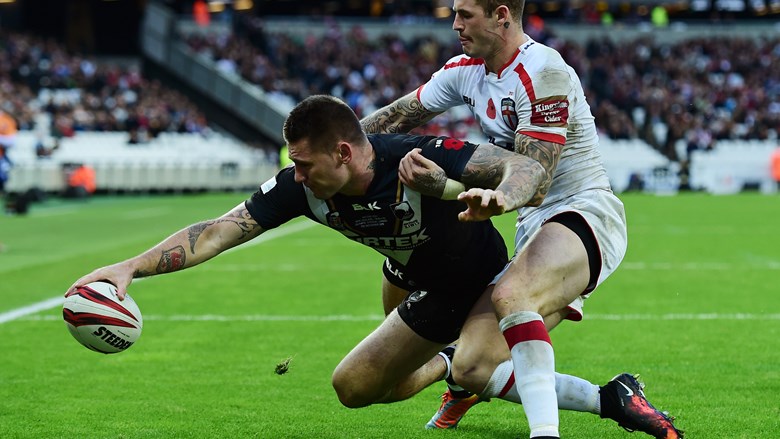 The New Zealand Kiwis kept alive their bid to claim the Baskerville Shield with a tense, series-levelling 9-2 victory over England in the second test at London’s Olympic Stadium.

After a try-less opening 40 minutes, Shaun Kenny-Dowall crossed just after the break for what proved a critical score, but there were some nerve-jangling moments to come for both camps and the 43,393-strong crowd.

Kiwis coach Stephen Kearney made a key late change, bringing Kodi Nikorima into the side at halfback for incumbent #7 Tuimoala Lolohea. Nikorima, wearing the #19 jumper, enjoyed a confidence-boosting start by forcing a line dropout, but England’s goal-line defence withstood the early pressure.

The Kiwis had the better of territory and possession during the first half, with the likes of Sam Moa, Tohu Harris and Jesse Bromwich consistently breaching the advantage line, and offloads flowing freely. But England’s scrambling defence continued to frustrate their myriad tryscoring opportunities.

It was the tourists’ turn to protect their line in the lead-up to halftime, repelling three consecutive England sets.

The rivals headed to the sheds locked at 2-all, after a physical, absorbing half of test football.
A forward pass by England James Roby inside the first minute of the second half provided New Zealand with the chance to break the impass.

Nikorima ran the ball on the last tackle near England’s line and offloaded for Harris, who picked the ball off his bootlaces and shifted it for Shaun Kenny-Dowall to dive over for his ninth test try.
Jordan Kahu landed a towering conversion from the sideline for an 8-2 advantage.

The try appeared to rattle England’s composure, with the hosts’ bid to equalise coming undone, courtesy of pushed passes and poorly-executed kicks.

The Kiwis, meanwhile, settled into a comfortable rhythm to heap pressure on the home side.
The tourists’ kicking game improved vastly on their first-half efforts, forcing three straight line dropouts during the middle stages of the second stanza.

Following the latter, Peta Hiku narrowly missed landing a killer blow, losing the ball over the try-line in the 62nd minute thanks to England’s desperate cover.

Co-captain Luke sprayed a 70th-minute penalty goal attempt and a spilled ball in the Kiwis’ ensuing possession gave England a full set inside the opposition half, but the hosts were unable to convert a gilt-edged opportunity.

Canterbury Bulldogs prop James Graham won the race to a grubber, but was ruled to have lost the ball by the video referee, who needed several views to adjudicate on the tight call.

Nikorima almost sealed the result in the next set, finding himself in the clear after his kick deflected off an England defender and Jason Nightingale kept the ball alive.

A brilliant tackle by England fullback Zak Hardaker brought the Brisbane rookie down just short of the line and the ball came loose.

The Kiwis kept their cool in the closing stages, however, and Jordan Kahu drilled a 20-metre field goal to give his side a match-winning seven-point buffer with three minutes left.

Issac Luke grabbed man-of-the-match honours after a typically dynamic dummy-half display, but there was none better than Kiwis second-rower Tohu Harris, whose robust running, second-phase play, tireless defence and outstanding clean-up work were vital to the series-saving triumph.