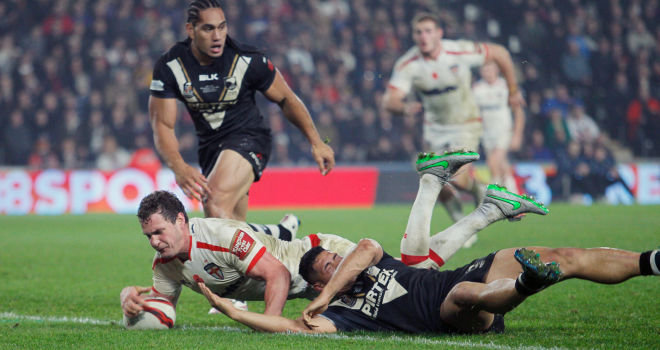 England fight back to win opening Test against New Zealand

England overcame a slow start to claim a stirring 26-12 victory over New Zealand at the KC Stadium and draw first blood in the three-match series.

Substitute back-row forward Brett Ferres scored two of his side’s three tries, following up his hat-trick against France a week earlier, as England came from 10-0 down to secure a first win over the new world-ranked number one team since 2011.

The hard-fought victory went some way towards making up for their agonising defeats by the Kiwis in the 2013 World Cup semi-final and last year’s Four Nations Series but England still have some work to do, starting at London’s Olympic Stadium next Saturday, to build on this promising start.

The series got under way with a spectacular lights show but it was distinctly gloomy for the first quarter as the tourists set off at a tremendous pace.

They were more vigorous in the tackle and caused all sorts problems for their hosts with their offload play, orchestrated by the excellent Peta Hiku, a centre who has been asked to perform the role normally carried out by England’s regular scourge Shaun Johnson.

Hiku got second rower Tohu Harris charging through a gaping hole in England’s defence for the game’s first try on six minutes and 10 minutes later all eyes were on dangerman Roger Tuivasa-Sheck when the classy full-back popped out a neat pass for ex-Hull prop Sam Moa to crash over for a try on his old home ground.

Issac Luke kicked one conversion to make it 10-0, which was an accurate reflection of the opening stages, and England needed two huge slices of good fortune to haul themselves back into the game.

The first came when an offload in the tackle by second rower Elliott Whitehead rebounded off the knee of full-back Zak Hardaker and hooker Josh Hodgson was on hand to pick up the loose ball and canter over for his first try for his country.

Gareth Widdop added the conversion, the first of five goals from as many attempts, and, although Luke extended his side’s lead with a 26th-minute penalty, England had a lucky escape when the video referees went against the inclination of match official Ben Thaler in disallowing a try from centre Jordan Kahu for an obstruction in the build-up.

England immediately made the most of the let-off, with Ferres taking George Williams’ pass to romp into space and round Tuivasa-Sheck for his first try.

Remarkably, England were level at 12-12 with Widdop’s second goal and they could have been in front by half-time but for a tremendous last-ditch tackle on second rower Liam Farrell just short of the line.

The scores breathed new confidence into England’s play, although the introduction of hooker James Roby had a lot to do with that too.

Tom Burgess also made a big impact off the bench as England completed their re-awakening and a penalty from Widdop five minutes into the second half put them in front for the first time.

Steve McNamara’s men turned the screw as the Kiwis began to lose their discipline and Ferres forced his way over from close range for his second try on 58 minutes, with Widdop kicking his fourth goal to make it 20-12.

The game might have been over four minutes later had Whitehead been able to take Hodgson’s pass as he charged for the line but the ball slipped from his grasp and England had to wait until the 77th minute to clinch the win, skipper Sean O’Loughlin bouncing off his opposite number Adam Blair to score his side’s fourth try.