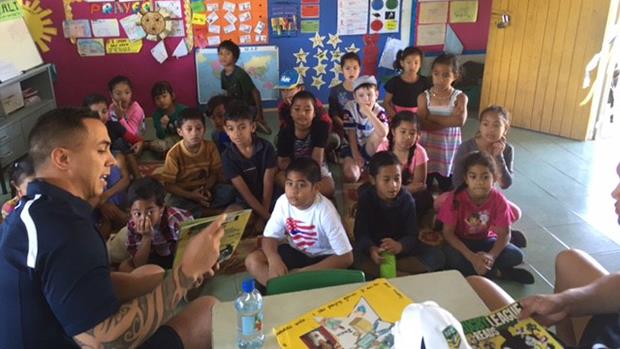 The team was split into five groups, including a member of the coaching staff. These groups delivered the program to every primary school class.

While this was happening there was another group delivering the Dream Believe Achieve program to 42 high school students at the High School Campus.

This program was received with great excitement particularly when the students recognised their Tongan heroes Manu Vatuvei and Konrad Hurrell both from the NZ Warriors.

At the conclusion of these programs the players took all the students out on to the school oval and conducted skill-based games where a great time was had by all. The students expressed their excitement and gratitude with a spontaneous rendition of the Tongan National anthem on the way back to school from the oval.

On Friday, the squad boarded buses and headed to the eastern side of the Island where they conducted a skills-based games clinic for the 50-odd students from the Mo’unga School who were not involved in exam preparations. Once again a great time was had by all.