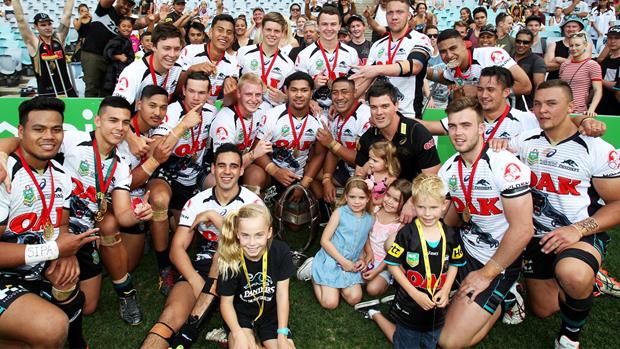 He had big boots to fill but halfback Jarome Luai has helped the Panthers to win a second Holden Cup title in the space of three years with a 34-18 win over a brave Manly-Warringah at ANZ Stadium on Sunday.

The minor premiers went into the game without their regular halfback and captain Nathan Cleary due to his decision to play or the Australian Schoolboys but just as he did against the Warriors in the Preliminary Final Luai proved to be the perfect substitution, sparking one try and scoring another himself to put the game out of the Sea Eagles’ reach.

Manly fought hard to score just before half-time through Luke Garner to trail 16-12 at the break but after coming close to scoring eight minutes into the second half conceded the next two tries.

Dealt a blow by an ankle injury to Robert Jennings early in the second half, Penrith were the first to score in the second term through centre Maliko Filino in the 50th minute but the lead-up came from Luai with some fast feet and a wonderful cut-out pass from big back-rower Thomson Tuigamala.

Ten minutes later Luai did it all himself just as Penrith’s last-tackle option appeared to have broken down.

The ball was flung wildly out the back by James Fisher-Harris and when Tyrone May found his halves partner Luai looked up and saw a scattered defensive line that he split with some wonderful footwork and good speed to put his side 14 points in front.

Playing in just his eighth under-20s game of the season, Luai was not only scoring tries but helping to prevent them, coming late to spoil a chance to Sea Eagles interchange Nicho Hynes before he regathered his grubber kick into the in-goal.

Trailing by four points at half-time, Manly had their hearts broken in the 48th minute when Tom Trbojevic appeared to have scored his second of the grand final only for the flag of the touch judge to bring them back, winger Mitch Thomas putting a foot into touch before passing inside.

With the game getting away from them it was Hynes again who sparked Manly eight minutes from full-time when he found impressive front-rower Liam Knight with a short pass 20 metres out from the Panthers’ line but when Luai again had a hand in the try for Fuimanu Enese three minutes from full-time a Panthers premiership was confirmed in Cameron Ciraldo’s first year as coach.

With the match kicking off in temperatures a tick over 30 degrees Penrith took full advantage of the first penalty of the game in the third minute to attack deep into Manly territory with hooker Soni Luke slicing through some thin Sea Eagles goal-line defence.

Having been under the pump in the opening exchanges the Sea Eagles worked their way back into the game with some repeat sets and came close to scoring in the 11th minute when winger Jesse Bogle was bundled into touch just short of the try-line.

They only had possession after some spectacular skill by five-eighth Will Pearsall stopped a Panthers drop-out from finding touch and then a few tackles later Trbojevic created space for Bogle before the Panthers cover defence converged.

The Sea Eagles were made to pay for their missed opportunity when the Panthers went the length of the field to extend their lead.

Kick-started by a wonderful kick return from Brent Naden, a dart from dummy-half from Luke got the Panthers within striking distance and five-eighth Tyrone May was too strong for a retreating goal-line defence to hold out, scoring in the 13th minute.

Having been brought down inches short only a few minutes earlier, Trbojevic timed his run perfectly to take a pass from Pearsall as the five-eighth was swamped by the Panthers defence to burst through a hole 10 metres out to score Manly’s opening points after 23 minutes.

An error from Manly winger Mitch Thomas in spilling a bomb put the Panthers back on the attack and it took just one tackle for Jennings to score his side’s third try of the afternoon.

In one of the most fascinating match-ups of the Holden Cup Grand Final Jennings’s pace was simply too much for Manly centre Addison Demetriou who was left clutching on the inside as Penrith jumped out to a 10-point lead.

After the Panthers unsuccessfully used a captain’s challenge on a lost ball in front of the Manly posts, the Sea Eagles worked their way downfield on the back of a penalty and scored their second on the last tackle.

Thomas went close to scoring in the right-hand corner and then on the last tackle Pearsall looked set to be tackled in possession before finding a long-striding Luke Garner who pushed past three defenders to score a crucial try for the underdogs three minutes prior to half-time.

Moses Leota and Corey Harawira-Naera took a power of stopping in the Panthers forward pack, hooker Soni Luke was a constant threat and was named the Jack Gibson Medal winner as man of the match and Tuigamala added plenty of punch of the bench.

Trbojevic was always a threat when in possession for Manly, Pearsall was a classy presence at five-eighth but the Sea Eagles’ best performers came in the middle with Knight, Billy Bainbridge and Luke Garner courageous at both ends of the field.