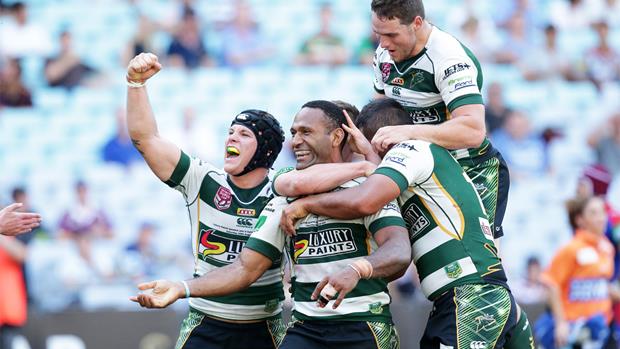 Ipswich’s unconventional brand of football is the toast of the nation after the Jets claimed the State Championship against Newcastle on Sunday, the second successive win by the Intrust Super Cup champions over the VB NSW Cup premiers.

The Walker brothers, Ben and Shane, have defied accepted thinking to introduce a new brand of football and after knocking off the Townsville Blackhawks last week at Suncorp Stadium claimed an even bigger scalp on the game’s biggest stage.

And while there was the spectacular in the form of short drop-outs and kick-offs, angled running and an unwillingness to ever die with the football, it was a resolute defensive effort in the second half that turned a vastly more experienced Newcastle team away time and again.

Captain Keiron Lander was absolutely inspirational with his selfless acts in defence, continually turning up to shut down a Newcastle charge just when his team needed it the most in his final game for the club.

Winger Richard Pandia had a game-high 25 runs for 218 metres and rampaging Billy McConnachie scored a try and racked up 198 metres from 17 carries.

Turning 57 per cent of possession into a 20-6 lead at half-time, Ipswich stunned the Knights in the opening moments of the second stanza with a Marmin Barba short kick-off into touch that earned them a scrum feed 35 metres out from the Newcastle line.

But if the Knights were shell-shocked they soon recovered, first half try-scorer George Ndaira darting out of dummy-half at a retreating defensive line and finding Jaelen Feeney steaming onto the ball to score beside the right-hand upright.

Using a power game to good effect, Newcastle came as close to scoring again as you possibly can through Honeti Tuha, the winger held up by opposite Pandia after regathering a Kerrod Holland kick in behind the line.

Tempers flared in the 61st minute as a second grand final in successive weeks appeared to be taking a toll on both teams and the Knights again came close to bridging the gap courtesy of Danny Levi but opposite number Matt Parcell held him up over the line.

The Knights continued to hammer away at the Jets’ goal-line but Ipswich refused to yield and finally got the ball back in their hands when Newcastle were pulled back for a forward pass after Ken Tofilau looked to have scored in the corner.

Out on their feet, the Jets got a rare shot in the Knights’ half courtesy of an error on a kick return and did what Newcastle couldn’t, robust prop Rod Griffin pushing past two defenders to power his way over the line in the 69th minute.

The Jets started the game in blistering fashion when Manly-bound hooker and Man of the Match Matt Parcell jumped out of dummy-half 10 metres out from the Newcastle try-line and blasted through a big gap left by Lachlan Fitzgibbon and Carlos Tuimavave to the right of the posts.

The Walker boys’ theory of keeping the ball off the opposition could not have got off to a better start with Newcastle unable to get their hands on the footy until the fifth minute of the game courtesy of a loose offload by Rod Griffin.

A dropped bomb by Carlin Anderson gave the Knights a shot at the Ipswich line and a bust by Jake Mamo created a great chance for winger Ken Tofilau but the ball came loose as he tried to ground it.

With possession running more than 70 per cent in their favour, Ipswich were handed a golden opportunity of their own following a Newcastle error 20 metres out from their own line.

There was a bit of razzle-dazzle from Marmin Barba early in the set but it was simply a spirited charge from Billy McConnachie straight and hard that saw the Man of the Match from the Intrust Super Cup Grand Final power over under the posts.

Midway through the first half the Knights appeared rattled by the unconventional methods of Ipswich who got the ball back from a short drop-out, spun the ball from one side of the field to the other and starved Newcastle of possession to the point where they 75 per cent of possession for the first 20 minutes of the game.

Carlin Anderson added a penalty goal to two early tries for a 14-0 scoreline before Knights veteran George Ndaira burrowed over from dummy-half in the 29th minute and converted his own try to bridge the gap to eight points.

The Knights tried to muscle their way into the contest but a crunching tackle by inspirational Ipswich skipper Keiron Lander jolted the ball from Marvin Filipo as the Knights attacked and the Jets pounced.

Rod Griffin picked up the loose ball and rather than taking the tackle drifted across field and picked up Marmin Barba coming back on the inside who sped past three Newcastle defenders to run 92 metres and score his 31st try of the season.