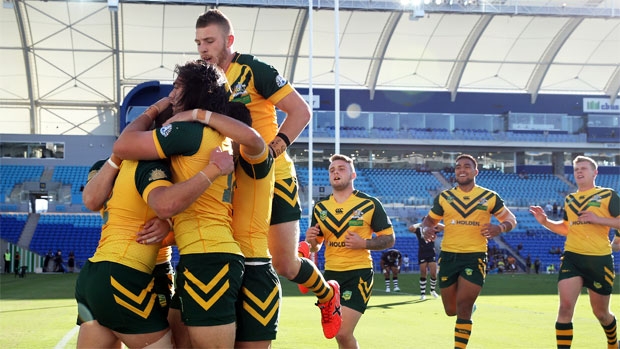 Junior Roos hold on in thriller

The Junior Kangaroos have held on to a thrilling 22-20 win over Trans-Tasman rivals New Zealand in a game of high skill and plenty of excitement at Cbus Super Stadium.

For the Junior Kiwis, Storm prop Nelson Asofa-Solomona was a massive handful with a series of powerful charges and offloads but may be looking at an extended spell on the sidelines for an ugly second-half lifting tackle on Brisbane’s Jo Ofahengaue that landed him on report.

Parramatta halfback Zack Dockar-Clay was also a standout and combined well with Wests Tigers playmaker Te Maire Martin, who was close to the Kiwis’ best.

Four points separated the sides at half-time following a tense, spirited, end-to-end, two-tries-apiece first half in which Sharks fullback Valentine Holmes stole the lead 90 seconds from the break with a stunning solo try.

Hedged towards the right touch line he put boot to ball and although the chip looked far too big off the boot it plugged off its point in the in-goal, wrong-footing Kiwi fullback Jamayne Isaako and allowing Holmes to win the race to his own kick.

Earlier the Junior Roos opened the scoring through Brenko Lee after some quality footwork, a powerful fend and a one-handed offload from Moeroa sent Lee over virtually unchallenged.

A long floating cut-out from Dockar-Clay to Joseph Manu levelled the scores before Robert Jennings reclaimed the lead for Australia in the 18th minute, showing incredible strength at the line to push through three defenders and reach out to plant the ball down.

Kiwi pivot Martin showed great evasiveness to score next to the posts and grab the lead before Holmes’ heroics on the stroke of half-time.

Asofa-Solomona lit up the opening of the second half with his powerful hit-ups to put the Kiwis in position to reclaim the lead, which they did when a Joseph Manu offload allowed Dockar-Clay to put Watson Heleta through a yawning gap.

A Holmes penalty goal drew the scores level at 16-all with 20 minutes to play before a powerful Moeroa charge shredded the Kiwis’ right-side defence and the Eels forward barrelled over for a six-point advantage.

A lost ball allowed Kiwi winger Tony Tumusa to sprint to the line to bring the Junior Kiwis within two but Dockar’Clay’s sideline conversion was waved away with seven minutes to go and the Aussies held on for a thrilling 22-20 win.