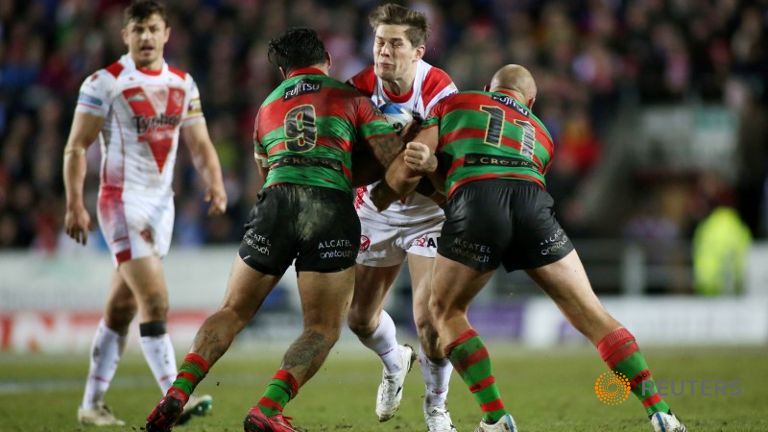 The one-sided World Club Challenge win, which was all but over when the Rabbitohs held a 24-0 lead after a first half onslaught, also handed the NRL sides a cleansweep of the inaugural World Club Series.

On hand to watch Sunday’s blitz at Langtree Park was Clive Churchill medal winner Sam Burgess and co-owner Russell Crowe, who shunned the glitz and glamour of the Oscars red carpet for a two-degree night in the north of England.

At least the Rabbitohs helped justify his decision and on this form they deserve favouritism to defend last year’s drought-breaking NRL title.

A late Adam Reynolds field goal ensured the utter mauling eclipsed the 38-point WCC wins by the Sydney Roosters in 2003 and Melbourne Storm in 2000 – both of which were also against St Helens.

The Rabbitohs scored early and often, rarely letting up between their opening try in the third minute and their seventh in the 67th.

They stated their intentions early, with off-season recruit Glenn Stewart scoring from his first touch for the club in a competitive match.

The former Manly backrower cleaned up the scraps from a Reynolds kick which had been missed by the initial chasers.

After a Reynolds penalty goal extended their lead, the Bunnies again crossed through the explosive Dylan Walker on 20 minutes.

Walker, showing why he is favoured to break into the NSW Origin side this year, backed up a Reynolds line-break and did well to beat two defenders on a swerving 30-metre run.

Greg Inglis compounded the pain four minutes later when he backed up a Bryson Goodwin offload, introduced the St Helens crowd to his trademark try celebration ‘The Goanna’ and extended the lead to 18-0.

The 17,980-strong crowd were on the verge of begging for mercy after 31 minutes when an awkward banana kick from displaced five-eighth John Sutton, now playing in the second-row, took a wicked bounce to deceive the half dozen St Helens players on hand to defuse it, and sat up kindly for Joel Reddy to score the first of his two tries.

It took just six minutes into the second half for the rout to resume, with five-eighth Luke Keary grabbing the spoils from a Reynolds bomb as the scoreline ticked past 30.

The score grew further when Chris McQueen, filling in at left centre while Walker was being treated for concussion, sliced through some butter-soft defence.

Souths had four players leave the field with head knocks, the most serious of which was Goodwin who copped an accidental knee to the head while attempting to score a try.

Walker, Reynolds and Sutton were all able to return to the field.