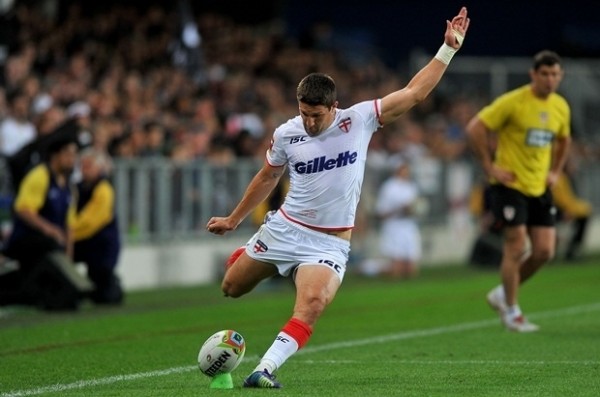 Widdop eager to leave his mark

English fans will get a chance to see the real Gareth Widdop when he runs out for St George Illawarra in the opening match of the new World Club Series against Warrington Wolves on Friday night.

The Halifax-born England stand-off experienced his first taste of international club rugby league five years ago at the age of 20 when he came to the UK with Melbourne Storm for their World Club Challenge clash with Leeds Rhinos.

He failed to break into the team for that match but returned three years later to help the Storm to an 18-14 win over the Rhinos at Headingley, and will be hoping to repeat the feat with the Dragons against the Wolves.

The big difference this time is that, instead of playing a support role to Australia’s famous playmaking trio of Cameron Smith, Cooper Cronk and Billy Slater, Widdop will be one of the main men after seeing his bold decision to move away from Melbourne pay off.

“I learned a helluva lot down in Melbourne playing with some of the greatest players ever to have played the game,” Widdop said as he cast an eye over the Halliwell Jones Stadium in Warrington. “I just felt for my career at the time it was right to move on and make a name for myself.

“I wouldn’t say it was a gamble. I had a lot of success there and obviously to leave that for a club that hadn’t had much success over the last few years was a big move.

“But it was more about myself as a footballer, to go out there and become a dominant ball player and a leader in a team. I really enjoy that.”

Widdop was an ever-present in his first season with the Dragons in 2014, when he top-scored with 137 points and found a new half-back partner in former New Zealand captain Benji Marshall, who returned to league halfway through the year after a short-lived move into union.

“Benji is another of the greatest players ever to play the game and to play alongside him is great,” Widdop said.

“He came in halfway through the year and as the season went on we became a bit better. He’s now had a full pre-season and, the more we play together, the better we’ll become.”

Marshall is no stranger to England, having toured regularly with the Kiwis, but playing in front of English crowds will be a new experience for a host of Dragons players and Widdop, who was a big Bradford Bulls fan before emigrating with his family at the age of 16, has been passing on tips.

“A lot of the boys won’t have experienced the atmosphere that you get over here,” he said. “I’m looking forward to it. The crowds are amazing.”

Widdop sampled that atmosphere at Leigh on Sunday when he watched the Bulls play their first Kingstone Press Championship match since relegation.

The game at Leigh Sports Village, where Widdop won the first of his 14 England caps in 2011, was played in front of an enthusiastic crowd of more than 7,000 as Bradford went down to the reigning champions.

“It was quite disappointing to see Bradford from where they were,” Widdop said.

“I supported them for so many years and used to go to all the games so to see where they are now is a little bit sad. But I’m sure they will turn the club around and get back into Super League one day.”

Widdop, who married a girl from Melbourne and has two young children, is loving life in Sydney but will not rule out one day fulfilling a childhood ambition of playing in First Utility Super League.

“Growing up in England, all I wanted to do was play Super League,” he said. “I’m happy in Australia but you never say never. Maybe when I’m a bit older I might come back and play a year of two.”