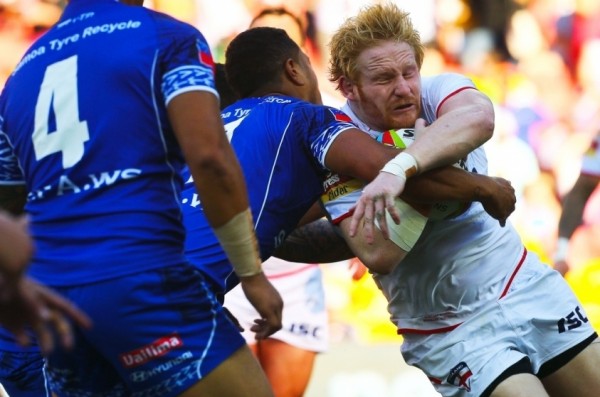 England survived a major scare to get their Four Nations Series campaign off to a successful start with a 32-26 triumph over Samoa in a thrilling clash in Brisbane.

The Pacific Islanders threatened to pull off a shock result on their tournament debut in front of a near-50,000 crowd at the Suncorp Stadium when they led 10-6 and 22-20 but the Tomkins brothers, Sam and Joel, came to England’s rescue with crucial second-half tries.

Sam Tomkins was also heroic in defence while Super League’s Man of Steel Daryl Clark enjoyed a fairytale debut, creating a try for his Castleford captain Michael Shenton with his first touch, but there are major defensive issues for coach Steve McNamara to resolve ahead of England’s next game against Australia.

The match began in 30 degree heat and England, notoriously slow starters on their tours down under, put themselves under pressure with a series of early penalties and handling errors and the Samoans, led superbly by debutant Josh McGuire, looked the better side for long periods.

It was a scoreless first quarter, with Castleford-bound stand-off Ben Roberts going closest for Samoa and England centre Kallum Watkins denied a try for a forward pass and it took a double substitution by McNamara to break the deadlock.

Chris Hill added some go-forward up front while Clark could hardly have dreamed of a better start as he created the opening try with a trademark scoot from dummy half.

Shenton was quick to spot the opportunity and took Clark’s pass to register his third try on his first Test appearance for four years and Widdop kicked the first of his six goals from as many attempts.

That ought to have helped England settle down but handling errors by second rowers Liam Farrell and Brett Ferres let their opponents back in the game and they hit back with two tries in five minutes to take the lead.

Substitute forward Isaac Liu accepted a McGuire pass to sidestep his way past Joe Westerman and took the two Tomkins brothers over the line with him, while centre Joey Leilua sent his winger Daniel Vidot over for a try on his home ground.

Kyle Stanley converted one of the tries as the Pacific Islanders led 10-6 but England maintained their composure with the aid of a clever kicking game from their half-backs and five consecutive penalties.

Quick hands from the impresive Matty Smith and Sam Tomkins created an overlap for Watkins to go over for a try eight minutes before the break and Widdop regained the lead with the conversion before extending it with a penalty on the stroke of half-time.

When Smith and Widdop combined to get Farrell over through a gap for his first England try six minutes into the second half, England were back in the ascendancy but the game was back in the balance after replacement hooker Pita Godinet twice bamboozled them from dummy half.

The Wakefield man sold an outrageous dummy to cross for his first try, dived under Ryan Hall and Sam Tomkins for his second and Roberts’ first conversion put Samoa back in front.

The game underwent another momentum shift when towering kicks from Smith created tries for the Tomkins brothers, video referee Henry Perenara overturning the decision of match official Gerard Sutton to award a 17th for his country by the full-back, and Widdop maintained his accuracy to re-establish a 10-point lead.

Still England could not relax, however, as winger Antonio Winterstein took McGuire’s pass to go over for a fifth Samoa try 10 minutes from the end.

Roberts could not add the goal but England were forced to scramble to keep their lead intact in a tense finish, with Charnley and Tomkins at the heart of a frantic rearguard effort.