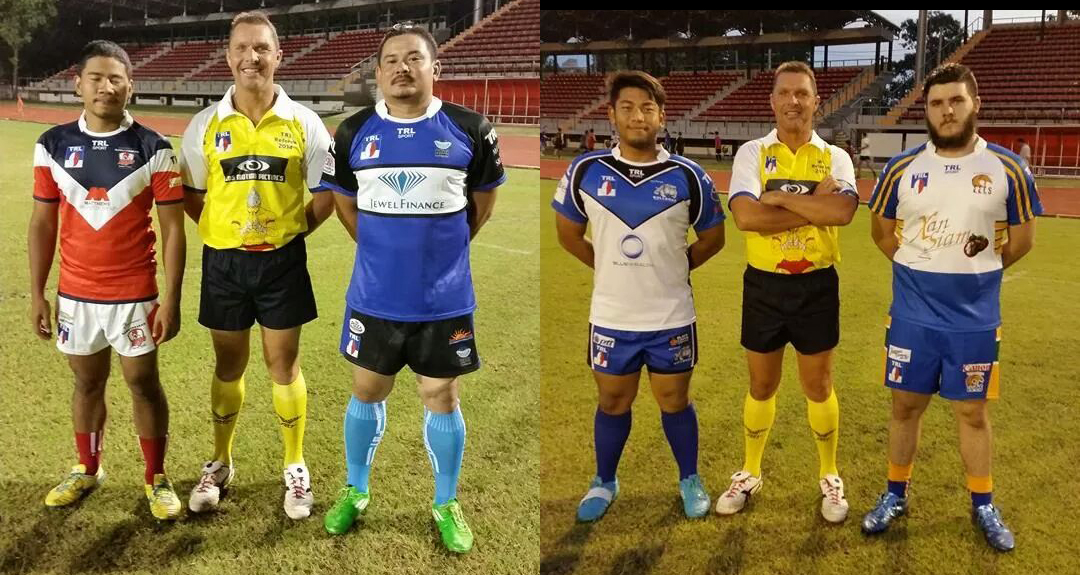 Thailand domestic league kicks off over the weekend

The inaugural Thailand Rugby League Domestic League commenced on in Bangkok on the weekend with games between Asoke Bangkok Eels and Lat Phrao Bangkok Bulldogs and followed by the Samut Prakan Roosters against the Pattaya Sharks.

The first try was scored by Toby Old for the Bulldogs on the back of repeat sets and the Asoke Eels first tryscorer was Dean Chapman. Doubles to Pongprai for the Bulldogs and a try to Harley Crane for the Eels saw a strong halftime lead to the Bulldogs 20-8. The Bulldogs score two quick tries after the break to skip out to a 28-8 lead before the Asoke Eels ran in 3 unanswered tries, including a double to Harley Crane that got the score back to 28-26 with 15 minutes to play. The Bulldogs pushed ahead to 40-26 with two tries in 5 minutes leaving the Eels a big mountain to climb in the last 9 minutes. The Eels ran in a try with 4 minutes remaining to end the game with a Fulltime score of 40-30. A highly entertaining game with a lot of tries scored.

The second game between the Samut Prakan Roosters and Pattaya Sharks was one way traffic from start to finish. The Roosters scored quickly with tries to Dave Tizzle and Wanmongkol crossing early. The Roosters running in 6 tries, 5 converted, to lead 34-0 at the break. The Roosters kept the pressure extending their lead to 38-0 before the Pattaya Sharks scored their first points of the game with 2 tries back to back taking the score to 38-10. The back of the Sharks was broken and their comeback stalled by a neat Roosters try from their captain Pach Pearodwong before Pattaya closed the game out with a late try under the posts to finish the game at 42-16.

At the end of Round One, the Samut Prakan Roosters lead the competition on for and against.  To find out more about the TRL please visit http://www.trlrugby13.com