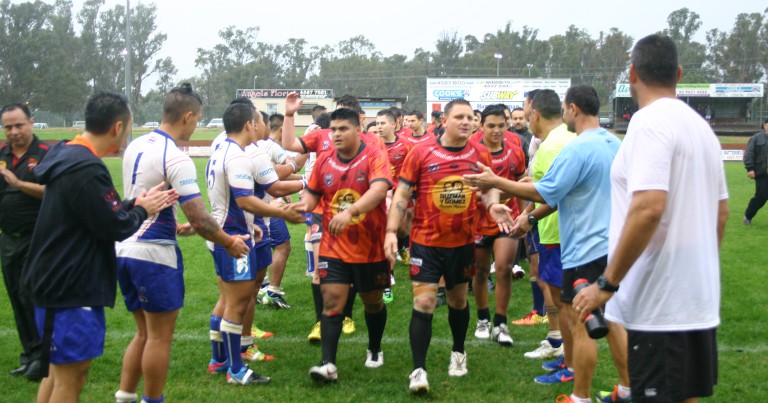 A penalty kick which hit the posts, an unsuccessful field goal and two disallowed tries in the final 15 minutes were the talking points, as Latin America and Thailand drew 16-all in their rugby league Test at Windsor, Australia.

Despite pouring rain throughout much of the game, the international newcomers staged an entertaining battle that ended in a thrilling conclusion.

Latino duo Sebastian Delapaz (offside) and Jaden Laing (held up) were both denied tries in the shades of fulltime by the barest of margins, while teammate Jonathan Espinoza was left to rue a 74th minute penalty attempt.

Teenage debutant Daniel Navarro had earlier bounced a kick in off the crossbar from the sidelines to tie the game, when co-captain Espinoza struck the uprights flush with a kick from 20m out as the clock wound down.

The ball rebounded and, in a mad scramble, Thailand retrieved possession before again surrendering it to a thundering tackle from the infuriated kicker.

Hearts were again in mouths as the final seconds evaporated, with Thailand kicking a 40-20 and ending the duel agonisingly short of the line.

It was a clash where teenage quartet Navarro, Laing, Delapaz and Brandon Tobar shone brightly for the GYG Latin Heat, signalling promising things ahead.

Just as bright a prospect was the possibility of a return bout, with fans, sponsors and officials keen to schedule a rematch after a contest which was tight throughout.

The largest margin at any stage of the game was six points, with Thailand scoring a converted try first via an overlap to centre Micky Pannao in the 10th minute.

His effort was matched by Colombian-born teammate Sebastian Maya Jimenez moments later, posting his first try at any level of rugby league with a bullocking run for a 10-6 advantage.

The heavens opened and the ball became a bar of soap for much of the following half hour, with the only change in score being a try to Stars’ backrower Wiilie Savanh after a succession of handling errors.

Try as they might, no side could then alter a 12-10 lead to Thailand for what seemed an eternity as tension peaked in front of the passionately vocal Windsor Sports Complex crowd.

Instead injuries became the main focal point for the coaches; standout Thai fullback Tyler Chant limping off after a twisting tackle, while his opposite man Grantito Chacone popped two dislocated toes back in an eye-watering show of brevity.

Buoyed by a win against Japan earlier in the year, Thailand finally broke the stand-off when the referee took his time to award a Rhys Tucker try in the 56th minute, closely inspecting as defenders peeled off a stacks-on-the-mill effort to defend their line.

Having lost their way somewhat to trail 16-10, the Latinos roared back into the game over the final 20 minutes.

Searching for their first win in the 13-man format, the GYG Heat first drove upfield from another nippy Navarro run, slicing the Thais in half over 50m before being tackled just short of the line.

Peruvian Luis Guillermo Fhon was the beneficiary, using his strength to power across out wide in the following tackles for a 16-14 score.

For Fhon it was a dream return after suffering a bad ankle injury just minutes into a 114-0 thrashing to the Philippines in January.

The entire Heat team had that punishing defeat weighing in their back of the minds before the game, but experienced elation when Argentinian Navarro landed his conversion from the far left of the field.

Navarro’s accurate – but underweighted – kick flapped its way towards the black dot like a pigeon struggling in a monsoon, dropping out of the sky over the last metre before bouncing triumphantly in off the bar.

The Latinos’ blood was still pumping when Navarro chipped across for centre Delapaz barely 60 seconds later, the speedy Chilean reaching the ball first and toeing again, before regathering and sending the crowd into raptures.

But amongst the hugs and high fives, players and fans failed to recognise the officials had ruled Delapaz offside,keeping the game locked 16-all.

Still, the Latin Americans dominated possession down the stretch and had the perfect opportunity to seal the game when awarded a penalty six minutes from the final hooter.

With normal kicker Navarro taking a breather on the sideline, prop Espinoza lined up the short range attempt, but hooked it to his left and saw it ricochet back into the field of play.

All was not lost when the ball was soon recovered, with several Heat players going within inches of scoring.

None was closer than towering lock Laing, held up in the 75th minute after what was another tireless and barnstorming display by the 18-year-old.

In the final roll of the dice, the Thais caught the Latinos napping with a sharp 40-20, but could not get the ball away cleanly for a field goal attempt in the dying seconds.